Jason Nuhfer is a fifth generation dairy farmer and makes cow care a priority every day on his farm. Jason, along with his parents Gary and Amy, milk about 130 cows at Bar Lee Jerseys in Huron County.

When did you know you wanted to continue your family’s dairy farming tradition?

Jason: Growing up, I always wanted to be part of the farm. It was kind of my passion as a young person. I was involved in a 4-H a lot – showed cows and did some other projects, as well. I was very involved in FFA throughout high school. Through that whole time, I knew that coming back to the farm was probably what I wanted to do. After college, in 2008, I came back and I started to do some facility improvements.

What have you done on your farm to ensure cows are healthy and comfortable?

Jason: Anytime you can make cows more comfortable, they’re going to be happier, healthier and more productive. So, we’ve always kind of kept that in mind. The year I came home from Ohio State, we decided to make some improvements to help bring cow comfort to the next level. We decided to do the free stall barn. We put a lot of research into it. We went all sand bedding in our free stalls, and it’s been outstanding. The first year we brought the cows into the barn, we changed nothing else. We didn’t change the parlor, we didn’t change the feed. We just took them from that barn and brought them in this barn, and we gained 1,800 pounds of milk per cow per year.

Another improvement we made was adding robotic milking technology. The robots make it easier for the people doing the work, but in a safe and healthy manner for the cows. The cows can lay down, eat and get milked when they want to – it’s open for business 24/7!

HEAR FROM THE FARMER

What’s it like being able to raise your son on this farm?

Jason: It’s a really a neat feeling just I can see him doing just the same things I did. He’s very interested and involved in the farm. He loves to ride in the skid loader and the equipment. He helps Mom in the calf barn all the time feeding calves and hauling buckets. 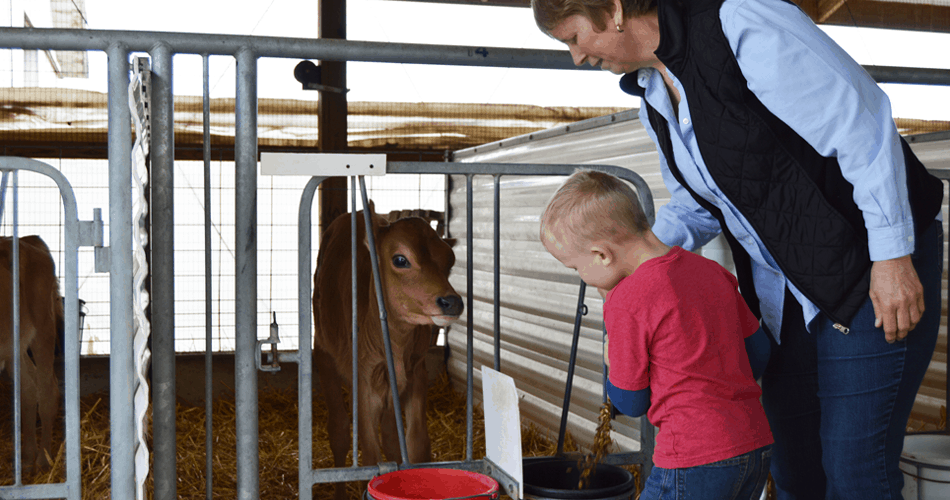